There are three Royal Cork Yacht Clubs. One is the globally-recognised historic institution which is directly descended from the Water Club of the Harbour of Cork founded three hundred years ago, the oldest yacht club in the world. The second is a remarkably successful competitive sports organisation which produces sailing and offshore racing athletes to Olympic standard. And the third is a friendly neighbourhood sailing club in a charmingly extended clubhouse, a club which is integral to its community of Crosshaven, and a quietly important part of the everyday life of its ordinary sailing members, while at the same time being the flagship expression of the Harbour of Cork in its recreational mode. 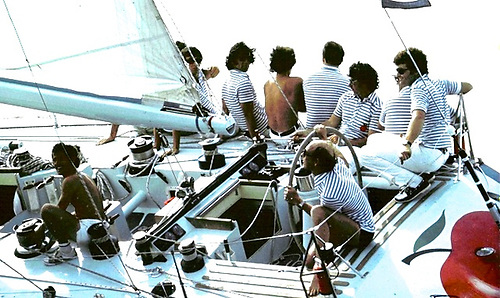 The second element in the Royal Cork’s makeup is its creation of world-class sailors, as seen here in 1977 as the Ron Holland 44 Big Apple (Clayton Love, Hugh Coveney & Ray Fielding RCYC) slices her way to success in the Solent in the Admiral's Cup with Johnny McWilliam on the helm, Harold Cudmore beside him, and Killian Bushe and Ron Holland among those on the rail. Although built by the Irish-born Joyce Brothers in Southampton, Big Apple was designed in Crosshaven, and her McWilliam sails were made there too. Photo courtesy John McWilliam

This year, the globally-recognised historic institution was naturally taking world centre stage as the focal point of a major international celebration of its seniority in our sport. But as that has been largely cancelled in a timely, mature and exemplary response to the worldwide pandemic of coronavirus, the other steady, rocklike and ever vital third version of the Royal Cork has emerged, gallant and unbowed, to continue the Club’s time-honoured role of serving its own people and place, playing the key role in providing the people, the boats and the enthusiasm for Crosshaven sailing to resume in a carefully-planned way at an area level.

The club and its antecedent organisations may have had several homes over the centuries. But ever since the Royal Munster Yacht Club moved from its up-harbour Monkstown base to quietly take over the new premises of the Cork Motor-Boat Club at Crosshaven in 1923, a location has