The name of Fairey Marine, and their incredible range of hot moulded wooden dinghies, is central to the growth that marked that golden era of dinghy sailing in the UK. A great product that was well marketed, for there was nothing like success to help sales.

From the research done when preparing to write the book Real Magic, which charted 70 years of the Merlin Rocket, it is now clear that the starting gun for the post-war dinghy sailing boom in the UK was actually fired by Jack Holt and Beecher Moore, as early as mid-1944. Using some black market timber and purloined bronze for fittings, Jack first made Kate, then Merlin, which Beecher Moore would demonstrate to as many of the top dinghy clubs on the Thames as he could reach. His message was clear: Before long, the war would be over and with the return of peace, boats like Merlin would be in great demand.

The drivers for these changes were all in place, with the growing role of women in the sport and a tacit agreement that the International 14, the benchmark dinghy of the day, was just too extreme to ever be a 'populist boat': some may have questioned this view, but this was the content of a discussion, held just before the start of the war, between none other than Beecher Moore and Ian Proctor, as the two sat together, on shore, in an early National 12! 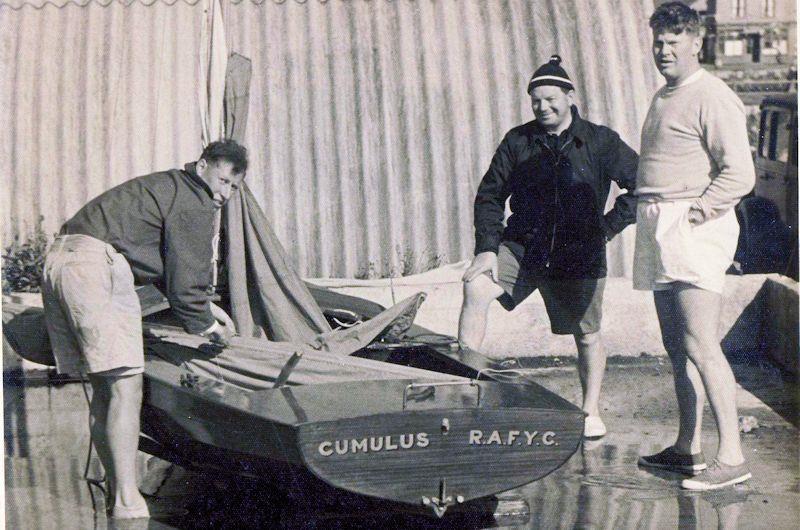 Jack Holt may have fired the starting gun for the post-war dinghy boom, but these two greats of the dinghy scene would be the men to make it happen! Ian Proctor, bending over his Merlin Rocket with Beecher Moore, in the white shorts watches on. Interestingly, this was taken at the old Hamble River Club, and just half a mile downstream is the Fairey Marine factory. - photo © MROA

Yet had this been the sum of the story, the golden era of dinghy sailing would have had a very sluggish start, for despite Holt and Moore searching for additional builders for their Merlin, the numbers of clinker (or carvel) hulls that they could produce would go nowhere near towards satisfying the demand that they had in part created. What was needed would be a different approach to the cottage industry that typified the small boat scene, both before and just after the war years. On numbers alone, it would take a move to a more industrial process of boatbuilding to supply the volume needed, yet nothing like this existed.

When the answer came, it would have its basis, like so many things back then, in the expediencies of wartime supply. The aluminium for making aircraft was in such short supply in the UK that collections had been organised for all the pots, pans and kettles that could be spared, with these being melted down and recycled. Anything else that could be pressed into service would quickly be exploited, with plywood being a prime candidate for use as a covering for aircraft wings and fuselages. After all, the use of moulded wood (and incidentally more advanced cold moulding techniques) was already well established in the field of aircraft manufacture, having been perfected by the Swiss as far back as the start of powered flight. 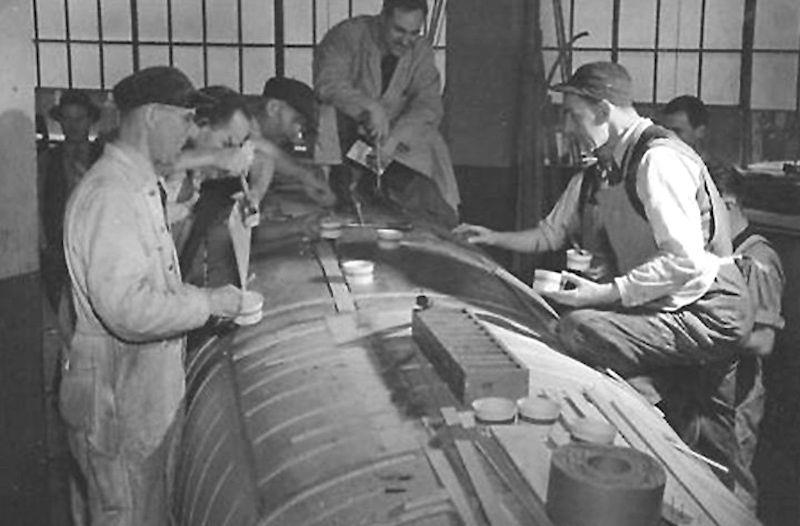 The more modern aircraft though would place a whole new range of demands on wooden construction, with the same airframe potentially seeing service from the frozen wastes of Northern Russia to the heat and humidity of the jungle. Either set of conditions could accelerate delamination of the ply, which has always been the big bugbear of any multi-layered wooden structure, with this due in part to the glue technology that was available at the time. This led to a search for a technique to somehow 'fix' the layered bonds, with one solution being the construction of a giant microwave oven that would effectively cook the structure.

Although this worked, the technologies needed were still in their infancy, so a more low-tech solution was employed. It is so low tech, that for many of the younger readers here today, talk of pressure cookers may raise some quizzical eyebrows, but in short, the use of pressurized steam heat can cook its way through everything from a tough joint of meat to a complex wooden structure. 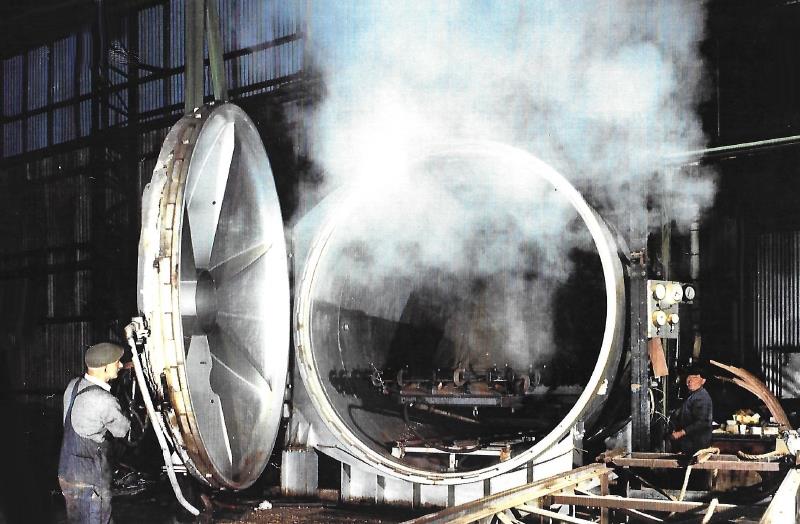 Opening up the 'autoclave' with the steamed structure inside. The system of rails that can be seen in the bottom right-hand corner would be moved into place and the finished structure could then be rolled out, allowed to cool, and then the heavy rubber sheath, held in place by the ring of G-cramps, removed. - photo © G Currey

Despite those shortages of wartime, this was easy to do technology. A long, heavy duty cylindrical pressure vessel was constructed, which was then connected up to a boiler. The wing or fuselage were wrapped in a protective rubber sheath, put into the 'autoclave' (the techy term for the industrial pressure cooker) and then the valves were opened. The pressure forced the veneers together, the heat cured the glue, with the end result being a structure that was strong, light and highly resistant to delamination.

If ever there was a prime site for a boat yard, then Hamble Point has to be it! The large slipway on the right-hand side of the picture would see many of the famous seaplanes that bore the Fairey name tested, then in more recent times, the prototype Firefly, Swordfish, Jollyboat, not to mention the Fairey versions of the Finn, 5o5 and International 14 would all get their first taste of water as they were launched into the Hamble River. - photo © Fairey Marine

One British company who invested heavily in this technology was Fairey Aviation, but their concern must have been that they would soon be facing a classic 'double whammy', as aviation was already welcoming in the era of jet engines, which didn't mix well with wooden airframes, plus the recognition that - as hostilities were drawing to a close - the demand for warplanes would soon cease, leaving the firm with a lot of unwanted hardware.

Faireys though were better placed than many other firms, as seated at the top of their decision makers were competitive sailors from the pre-war years. Together they had correctly identified the direction that post-war small boat sailing would take and they had the added bonus that they were already well connected to the people who could make that happen.

For once the YRA, the Yacht Racing Association (now the RYA) were ahead of the curve, as one of their first post-war actions was to implement a design competition searching for a one-design 12ft dinghy.

Cowes-based dinghy designer Uffa Fox already had just such a boat drawn up (one could almost use the phrase 'oven ready'!) as he had designed the Sea Swallow back in 1939, only for it to stay firmly on the drawing board for the next six years. Fox was connected to Faireys courtesy of a friendship that harked back to his International 14 sailing days with Colin Chichester-Smith, who was by then a Director at Faireys. They had the hardware, a hefty stock of left over birch veneers and were looking for just such an opportunity. A new company, Fairey Marine was formed, Fox retitled his plans from Sea Swallow to Firefly (the name of one of Fairey's most successful planes) and when the YRA selected the Firefly as the new 'National' dinghy, work at Hamble could start on making the hull moulds. 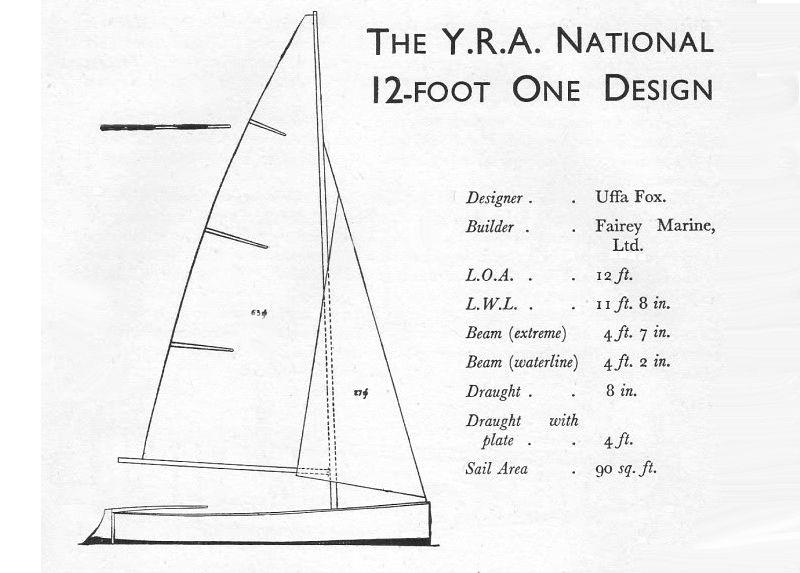 Design for the YRA National 12 Foot dinghy, which became known as the Fairey Firefly - photo © RYA

There was one more piece of the jigsaw still to come, which came in the form of Charles Currey, another top International 14 sailor, who was well known to both Chichester-Smith and Fox. Currey would be brought in to help develop the new Fairey Marine Company, by sailing the new boat and helping promote it out afloat. It is hard to understate just what a game changer the new Firefly was in 1946, as the majority of dinghies were still being constructed using multiple rock elm ribs to brace the inside of the hull. When the first Firefly hulls were popped out of the autoclave, the hulls were not only light, but completely smooth inside and out.

The construction was expected to be robust, but one of the early hulls would still be put to the test. The bare wood was sealed with varnish, before being taken out to the creek that used to act as the northern boundary to the factory site, and there the hull was buried in the soft mud. After being untouched for a full twelve months, it was taken out, hosed off and was found to still be 'as new' (then decked and sold - the motto at Hamble was 'waste not').

Since the rise of the International 14s in the late 1920s, then the National 12s in the 30s, the current model in dinghy sailing had developed around there being a clear differentiation between the boat builders, spar and fittings makers and sail lofts, but Fairey would fundamentally change this with an approach that is very recognisable today, as the Firefly was very much a SMOD. For just £65, you got the whole boat, complete with mast and sails, fitted out and ready to race.

Already a radical boat (in 1946 terms) the Firefly would take another huge step forward, as it would be equipped with a metal mast. Aluminium spars had first appeared back in the late 1930s, but these had been expensive one-offs: instead, the 'Reynolds Mast' would utilise a sheet of aluminium bent and formed around a mould. This though would be the limit of the available technology so tapering above the hounds would not be possible. Instead, the mast would be completed with the addition of a wooden top section. 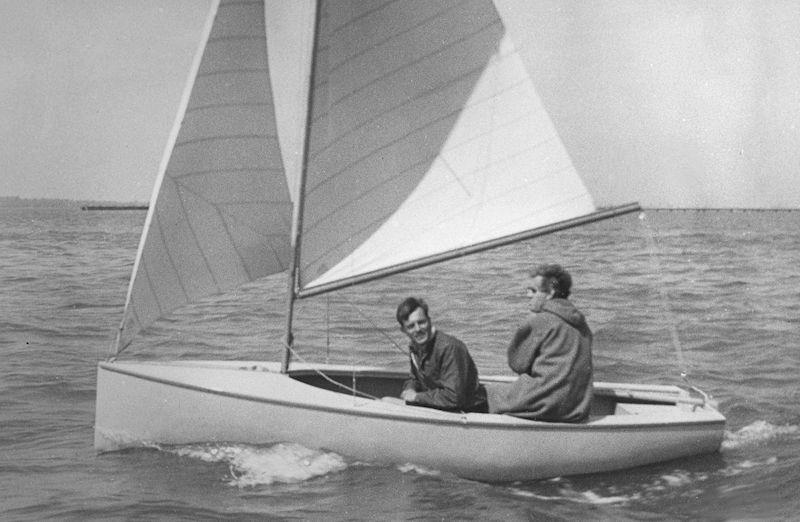