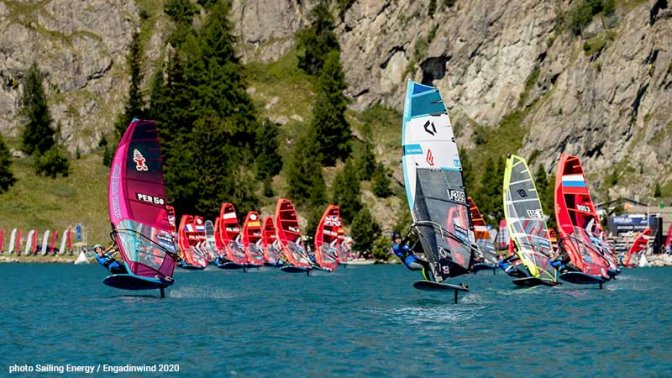 The event was exceptional in more than one way. The FormulaFoil World Championship this week brought together nearly 200 windsurfers for one of the first international post-containment competitions. And the French responded present on the bucolic shores of Lake Silvaplana in Switzerland, with no less than 50 tricolors in the running and a raid of medals in the end! Almost untouchable from start to finish, Nicolas Goyard (A. Calédonienne PAV) and Hélène Noesmen (SN Sablais) were crowned World Champions, Pierre Mortefon (CN Corbières) won the bronze medal after a Championship which will remain as the very first international event for the future windsurfing of the Olympic Games in Paris in 2024, the iQFoil.

After a long wait linked to the Coronavirus epidemic, the best windsurfers on the planet have finally been able to regain the pleasures of competition at the international level. Behind the masks we could guess beautiful smiles when putting on the wetsuits and finally going to face its competitors. For the occasion, the French have been numerous to join the Swiss Alps and more precisely the charming Lake Silvaplana, located only a few cables from that of S t-Moritz. A delegation of 50 tricolors who put on the show this week and who pocketed a great harvest of medals this Friday! Because if Nicolas Goyard and Hélène Noesmoen have won the world titles brilliantly, other French tricolors have also distinguished themselves in Switzerland. Pierre Mortefon, the World Slalom Champion in Funboard last year, pocketed a beautiful bronze medal, just ahead of a certain Thomas Goyard (5 th ), the French selected in RS: X for the Tokyo Olympic Games in 2021. Among the Young Lola Sorin and Fabien Pianazza won the titles of World Champions, underlining all the more their status as spearheads of this new generation of French “Windfoilers”!

A first for iQFoil

The first international competition of the post-covd19 era for windsurfers, the FormulaFoil World Championship also attracted all the attention of followers because it welcomed a large number of competitors in iQFoil, the future board for the Olympic Games after the Tokyo Olympics. A discovery in international competition well anticipated on the French side since several courses had been organized beforehand out of confinement to allow athletes to tame this new flying tool. Courses where we found windsurfers from Funboard such as Delphine Cousin, Marion Mortefon, but also the 2019 windfoil champion Nicolas Goyard. Also present were athletes from Olympism such as Louis Giard, Thomas Goyard, Pierre Le Coq, and many young people from the # Generation2024 such as Lucie Belbeoch.e and 4 th in this brand new discipline!

We can get a more precise idea of ​​this new hierarchy with the iQFoil European Championship which opens this Sunday on the same lake of Lake Silvaplana. We could see the French shine once again!

Hélène Noesmoen, World Champion: “It's really great, it's my first regatta in foil and I didn't know what it would be like. We had a great time all week, the conditions were great. My goal was to get on the top step of the podium and it's really nice to achieve it. I hope to do as well next week on the European Championship ”.

Nicolas Goyard, World Champion: “I'm very happy, it's beautiful, I'm happy. The week went well, I had no doubts, I was calm because I was clearly a step above the speed level. I'm already looking forward to next week for the IQFoil European Championship where I'm also aiming for the title. I hope there will be some adrenaline. "