The first America's Cup Challenger to arrive in Auckland, New York Yacht Club's American Magic, has been putting in the hours on the Waitemata - sailing any day on which the weather is suitable - and as we saw last Monday week, staying out when it is not.

The US team sailed at the weekend - both Saturday and Sunday - which was a smart move as the recreational boaties were ordered to stay ashore as part of the re-imposed COVID-19 lockdown - giving the AC75 a free run of the Hauraki Gulf. 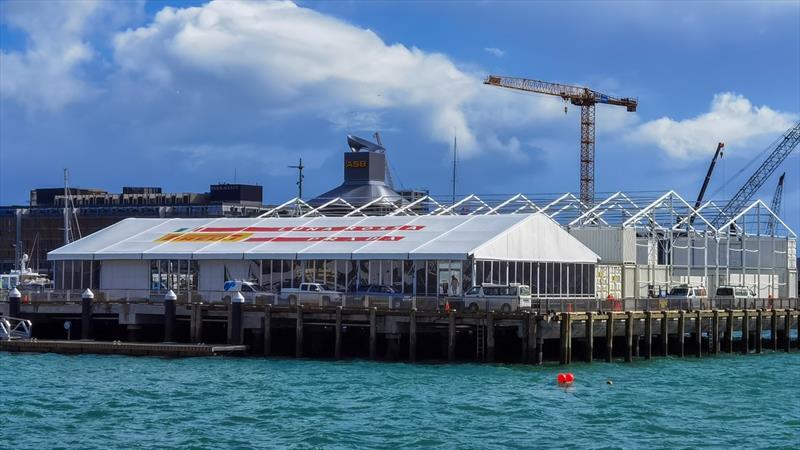 Quite when either team sails again is weather dependent. So far this week, Monday and Tuesday have been lost to strong winds and rain squalls. Wednesday is dubious for the same reason, but possible. Thursday will be too much wind unless sailing in winds gusting up to 28kts is deemed OK.

Friday looks good and the weekend too - with the kind Coalition Government extending the Lockdown to the end of the weekend. No playing dodgems with the recreational fishing boats and the like.

The US team are playing catch-up, as are all others - given the time lost due to COVID-19. American Magic lost five months sailing time after realising in early March that the first of two America's Cup World Series regattas wasn't going to happen, and made the decision not to ship their first AC75 to Sardinia.

Instead, they opted to charter a ship to transport Defiant directly to New Zealand, along with their fleet of chase boats and the small town of containers which accompany most America's Cup teams.

They started sailing in Auckland now four weeks ago, and clearly have their strengths and weaknesses. 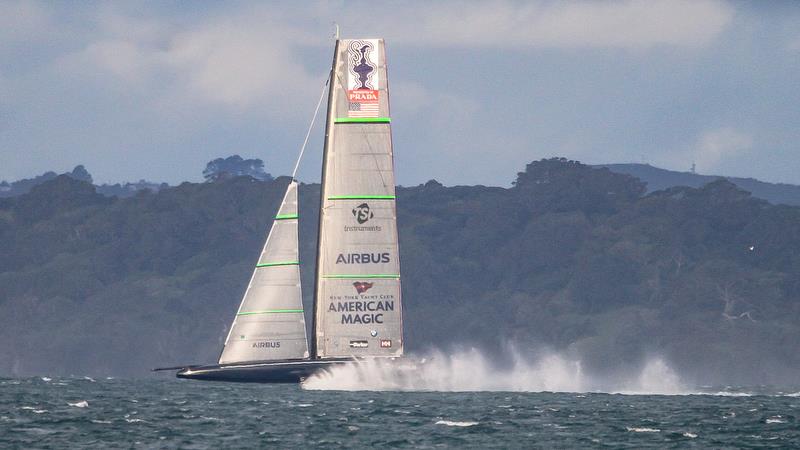 One of the constraints they are working with is how to catch up five months of on the water testing and development, plus pack in the work that was already scheduled for Auckland.

So while their on the water days are long - there are often significant time outs as adjustments are made. They don't have the luxury of bedding in changes to a refined level before moving onto the next group of upgrades.

There is the vexed design issue of the concept that the team will follow for Boat#2 - or their likely race boat.

Of course, all teams had to make decisions on Boat #2 design direction several months ago - and the second boats for all the challengers are expected to be airfreighted into Auckland sometime in September.

Some and maybe all teams will make a design concept change. There are risks with either building a second scow for INEOS Team UK and American Magic, or doing a skiff - and having one of each genre to evaluate. 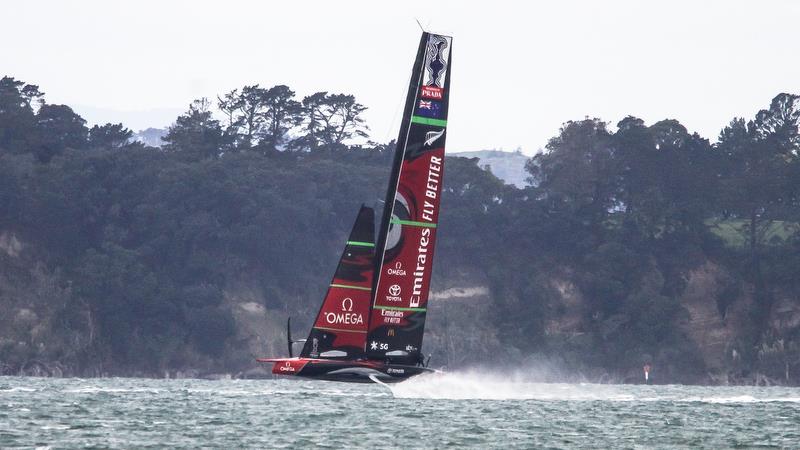 Equally for the Italians and New Zealanders - while they have the first generation AC75's in the skiff design genre, there is a risk of continuing down the same path, only to find that the USA and UK teams will come up with a better concept. Alterations to the hull surface (and shape) are limited to just 12.5% - which restricts changes that can be made.

American Magic's Defiant is the first opportunity NZ fans have had to see how the scow genre AC75 works, and comparisons can be drawn between the scow shaped Defiant, and the skiff shape of Emirates Team New Zealand's Te Aihe.

To our eye, Defiant is quite a different boat upwind and down.

Downwind she seems to sail very nicely with her aerodynamically influenced hull riding well clear of the water, and sitting on just the two immersed foils, which are usually throwing only a fine shower of spray. 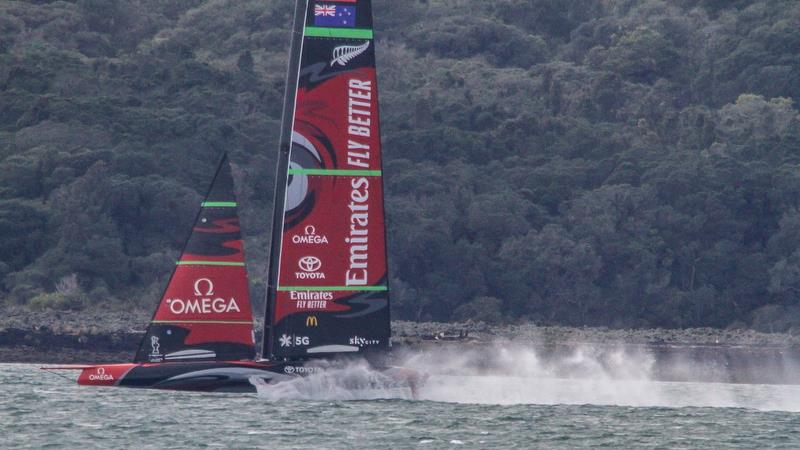 Upwind it is a different story with the foil arms often appear to be ploughing through the water with a significant wake apparent. From a distance, it is hard to tell if this phenomenon is creating significant drag, or if it is purely a foiling illusion.

Te Aihe on the other hand - and particularly since her recent upgrades - appears to maintain a more consistent trim upwind. If surface contact is made with the hull, it will usually be with the sharp bow, rather than the blunt underside of the hull as occurs with the scow type. 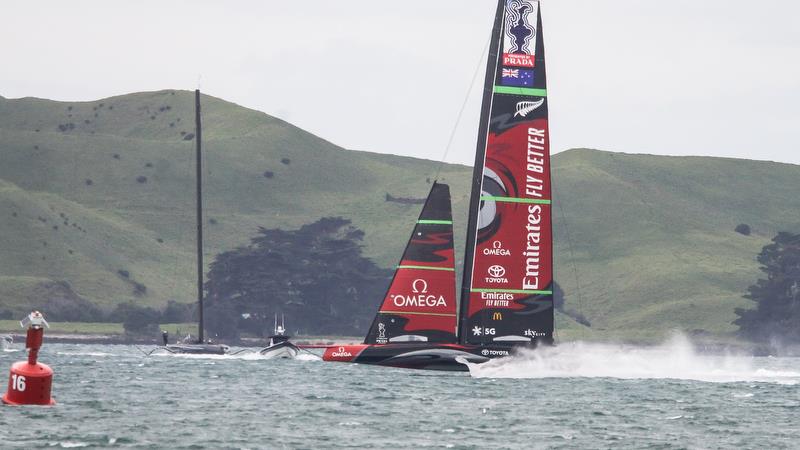 For sure, the difference is largely visual and seems also to be quite dependant on the viewing angle. From astern Te Aihe gives quite a different impression from the side or bow view. Only the designers can tell whether there is significant drag or other performance inhibiting effect. The rest of us can just guess and speculate.

But we suspect in the America's Cup design stakes, that the determining factor in the 2021 America's Cup will be wing, foil arm and flap development and their control systems.

It will be fascinating to see in the second generation of AC75's as to how the designers have reacted to these challenges, and how/if their solutions have changed, or if they have gone for a development of Boat#1. 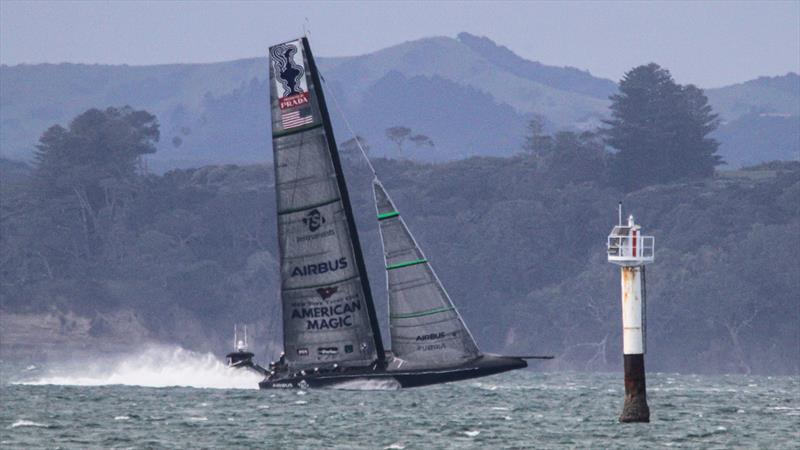 The AC75 class rule is very different from the near one design of the AC50, and there is more than one "right" answer in a restricted design like the AC75 and previously in the AC72 catamaran, and prior to that the IACC keelboat used in the America's Cup from 1992 to 2007. We'll be hearing a lot more of the "trade-off" word as the nuances of the designs are discussed, and we can see where the designers have placed their bets.

Even though New Zealand is back in partial lockdown, it is quite apparent that almost regardless of the state COVID-19, that the event will go ahead in some form.

Only return to a COVID-19 Alert Level 4 could seethe Prada Cup and America's Cup delayed. However the NZ public and Auckland businesses have made it abundantly clear that yo-yoing in and out of Lockdowns is not an acceptable strategy - with Downtown Auckland being largely devoid of people thanks to a combination of Lockdowns and major roadworks upgrading the Auckland transport infrastructure. 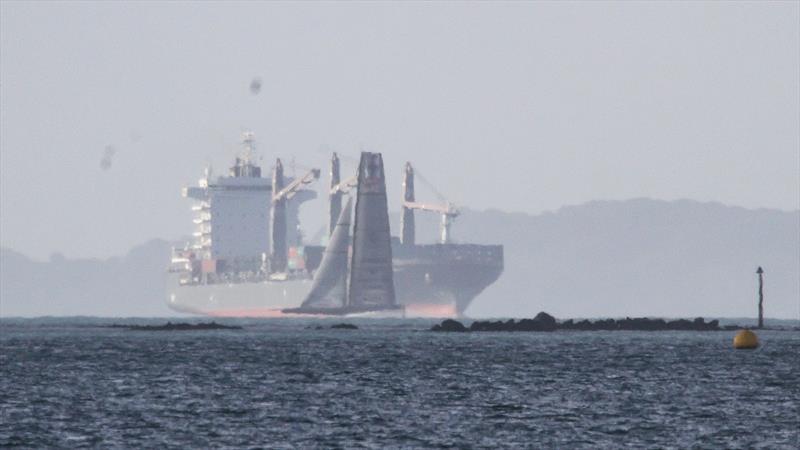 It is up to New Zealand to show some flair and foresight, and be able to run with several options for AC75 racing and America's Cup coverage, instead of locking into a very restrictive, "we've always done it this way" approach - in what we know is, and will be a rapidly changing, and uncontrolled environment. 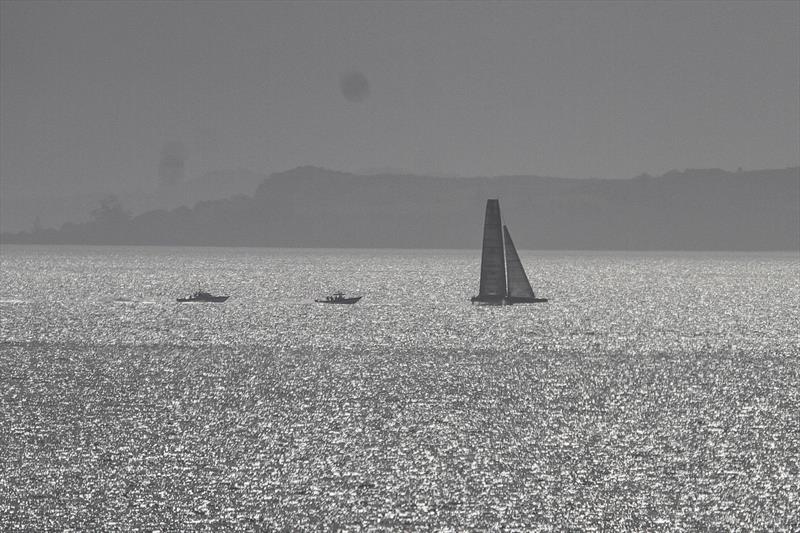