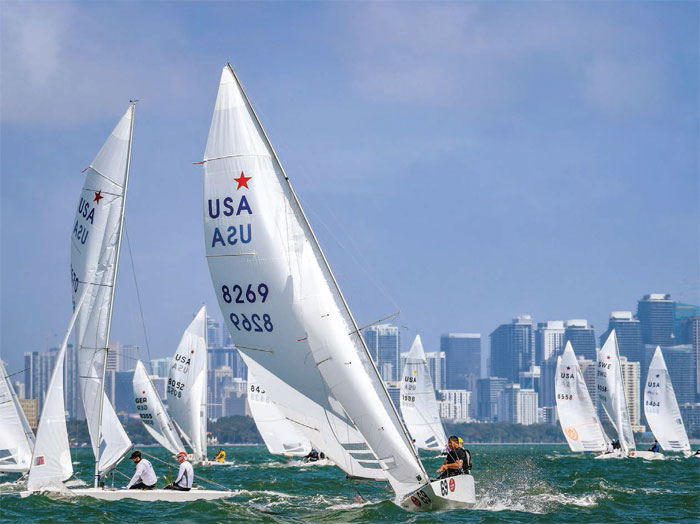 We’ve yet to meet the sailor who has raced the historic Bacardi Cup on the glorious waters of Biscayne Bay who did not want to go back again... and again and again

If you are looking for some world class, warm climate winter racing, with palm trees, blue skies, azure waters, epic après-sail and where you can rub shoulders with the world’s best, then get the Bacardi Cup and Bacardi Cup Invitational Regatta in Miami, USA, 5-11 March 2023 in your calendar.

Bacardi’s involvement with sailing stretches back almost 100 years, sealed since 1927 when the brand partnered with the Star Class in Havana, Cuba for the first ever Bacardi Cup. Even back then, the popularity of the Star Class and Bacardi brand meant the Bacardi Cup was destined for success. Today, nine decades after its foundation, sailors the world over still aspire to participate in the Bacardi Cup, celebrate the regatta’s glorious history and secure their names on the prestigious trophies. From the outset, Bacardi has proudly set the standards for running outstanding racing and impressive socials.

Main picture: the Star Class has been racing in this event for almost a century, ever since the first edition of the Bacardi Cup in 1927

Miami’s Biscayne Bay in midwinter offers stunning palmfronded sailing conditions that in a week will present both a joy and a challenge to all sailors. The weather ranges from the normal warm subtropical southerlies to the occasional sharp, cold blast of northerly breeze from a passing cold front to remind everyone it’s still March. Regardless, the clear waters of the bay are always inviting and it’s a short commute out and back to the race areas. The fleet line-up is world class and whether you are a legend of the sport or a weekend enthusiast you are guaranteed phenomenal racing.

There are few better venues in the world than Miami in spring, as the essential ingredients of warm weather, reliable breeze, camaraderie and exceptional hospitality ensure teams flock to enjoy the Bacardi Cup and Bacardi Cup Invitational Regatta. The joy on faces says it all and Bacardi is well aware of the event’s potency, so year on year the mission for excellence continues.

Back on dry land after a thrilling day on the water, sailors are invited to relax, unwind and soak up the renowned hospitality. With typical Bacardi flair, the free-flowing complimentary cocktails, food and music boost the fun factor and up the tempo for the party animals.

Attracting a diverse cast of teams from around the world, the event regularly hosts more than 500 sailors from 20+ nations who come to compete against an array of talent and heroes, and to be part of this unique event in Miami.

Uniting generations, the Bacardi Cup is like no other event combining six world class race days of pure drama and spectacle, followed by a party atmosphere ashore. The regatta remains a landmark event for the Bacardi Rum brand and for the Bacardi family.

Despite its relaxed atmosphere and nostalgia, the Bacardi Cup is known for its twists and turns as numerous sailing legends, Olympians, Star world champions and Bacardi Cup champions aplenty fight it out. It is no easy ride, and there is every chance the world’s best will find themselves overhauled by amateur teams and weekend warriors. Staking your place on the leaderboard is never assured and the challenge for victory remains as tough today as the first edition back in 1927. 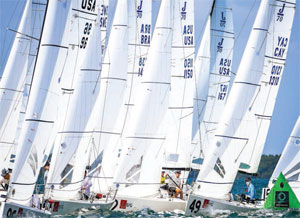 Above: the Bacardi Cup has expanded its scope in recent years and now includes large fleets of sports boats, including a strong showing of J/70s, alongside the original Star Class regatta.Below: this year’s winners, Bruno Prada (left) with the Tito Bacardi Trophy and Mateus Kusznierewicz with the legendary Bacardi Cup itself 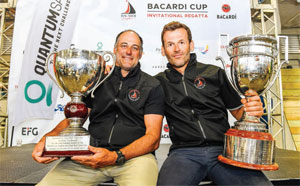 With deep respect for the traditions of the Star Class, sailors face the challenge of one endurance race per day, and the zero-weight limit rule ensures the event remains accessible to all crew combinations.

Back-to-back 2022 and 2021 Bacardi Cup champion, Mateusz Kusznierewicz from Poland sums up why he, along with so many others, head to Miami year after year, saying: ‘It’s a brand. It’s a tradition. It’s a fantastic place. It’s a perfect time of the year. It’s great people. It’s this magic taste and feeling you have. Once you taste it, you want it again.’

Celebrating 100 years in 2027, the Bacardi Cup will no doubt continue to lead the sport into the future and retain its role as a unique international sailing tradition.

Progressing from the global popularity of the annual Bacardi Cup, it became a natural evolution to embrace other high-performance classes and the Bacardi Cup Invitational Regatta was born. The Bacardi Cup Invitational Regatta offers racing for the J/70, Melges 24, Viper 640 and VX-One sports boats, who prefer a short course style of racing, with multiple races held per day and only three scheduled race days overlapping a weekend. With an added pre-race day for boat setup and a practice session, this is a popular and wellproven format.

Hugely popular, the J/70 has been on the starting line in Miami since the first fleet was created. High-performance but stable enough for the whole family, the class features a huge depth of talent.

The Invitational Regatta is a staple for the fast and furious Melges 24 style of racing and the event is used as a USA national ranking event as well as settling the final score for the Bacardi Winter Series.

The Viper 640 is a relatively simple boat to sail and easy to set up for the crew of three or four. Newbies pick up the nuances of the boat easily and the sailing experience is sure to put a smile on your face, whether amateur or pro.

Simple, fast and fun is the mantra for the VX One, which offers crews of two or three, from junior to advanced a thrilling and sporty sail.

The organisers make it easy to just turn up and race. Venue logistics are super-organised, with careful planning of where to park boats, trailers and people on what can be a compact and crowded waterfront. There is no better feeling than knowing there is an organised and secure process to handle your boat, your trailer and your crew so that you can focus on why you’re there: to sail well and have fun.

The organisers and host clubs coordinate short and long-term storage options for the hundreds of boats that visit to race throughout their busy winter season, including prior to and during the Bacardi Cup events – at the Winter Series regattas for the Melges 24 and J/70 classes held over 16-18 December 2022 and 26-29 January 2023. 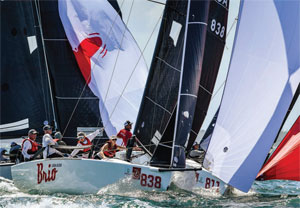 Above: fast and furious competition in a world class fleet draws the cream of Melges 24 teams from around the world.Below: with typical Bacardi flair, the free-flowing cocktails boost the fun factor 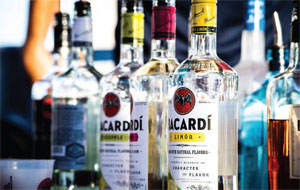 Charter boats are available and there are on-site support and coaching options. A wide range of accommodation choices are nearby, as well as an event accommodation partner to handle teams’ requirements.

Even for family and friends who are not racing, there is plenty to do and see in nearby Coconut Grove and Miami is just a short journey. The host clubs along the waterfront throw open their doors, with the race village set up at the central venue of the Coral Reef Yacht Club.

It is evident that the event team and Bacardi are focused on ensuring a world class and enjoyable event for sailors, race officials and everyone involved. No wonder, year in year out, so many head to Miami for the finest winter sailing anyone can find on earth and superb parties!

Bacardi doesn’t make commitments by half-measures, it is all in. The company has been focused on not only creating a desirable brand, but its patronage has supported sailing events to evolve and be different.

The Bacardi Cup and Bacardi Cup Invitational Regatta are almost the stuff of dreams. Who wouldn’t want to be in Miami in the winter warmth and sun, racing on clear waters, set against a palm tree waterfront and dramatic city skyline? These events are amongst the world’s most prestigious regattas and whether you are standing on the podium or not, you really will enjoy every moment. The Bacardi magic is open for everyone to be part of.

There’s no dream too big – and the world’s best continue to dream of victory in Miami. The 2023 Bacardi Cup and Bacardi Cup Invitational Regatta should be on everyone’s calendar for the coming winter season.