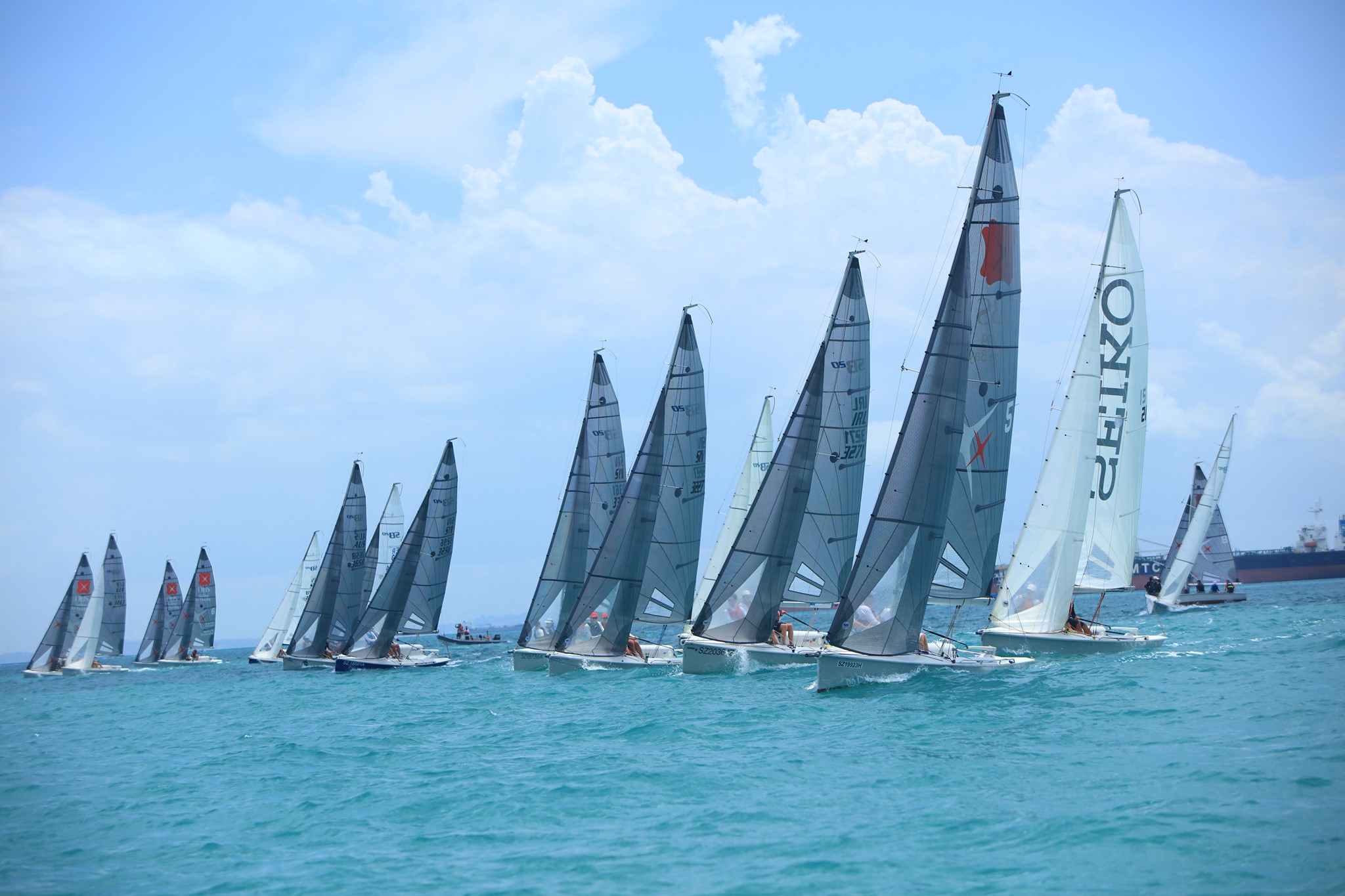 Amendment to Notice of Race 1. Delete NOR 2.5 Umpired Fleet Racing

1.1. The regatta will be governed by the rules as defined in The Racing Rules of Sailing, where applicable, the International Rules for Preventing Collisions at Sea, The  Maritime and Port Authority Guideline to Pleasure Craft Licensing.

1.2. National authority prescriptions will apply. For RRS 40 Personal Floatation Devices, add on  after the rule the following: “Singapore Sailing Federation prescribes that every boat shall  carry life-saving equipment conforming to government regulations that apply in the racing  area.”

1.3. In all rules governing this regatta, the notations:

1.3.1 [DP] denotes a rule for which the penalty is applied according to the RRS Introduction –Notation.

1.3.3 [SP] denotes a rule for which a standard penalty will be applied by the race      committee without a hearing. This changes RRS 63.1, Appendix A4 and Appendix A5.

1.4. [DP][NP] In accordance with obtained permission under class rule A6, the class rules are  changed as follows:

(a) Class rule C.5.1 is deleted entirely and replaced with the following: C5.1 A floating  throwing line, minimum of 20m long and 6mm in diameter, shall be attached at the  stern.

(b) Class rule C.4.2: Mobile telephones and handheld GPS may be carried on board.

1.5.  [DP] The penalty for a breach of the class rules may, at the discretion of the Protest  Committee, be less than a disqualification.

1.6.  [NP] The infringement of RRS Appendix G, IDENTIFICATION ON SAILS, shall not be  grounds for protests by a boat.

1.8   If there is a conflict between a rule in the Notice of Race (NoR) and the Sailing Instructions (SI), the rule in the SIs will take precedence. This changes RRS 63.7.

1.9   If there is a conflict between languages, the English text will take precedence.

Notice to Competitors will be posted on the Official Notice Board located in front of the  Race Office. Notices may also be posted online via event web. Failure to access  a notice online will not be grounds for redress. This changes RRS 62.1(a).

Any change to the Sailing Instructions will be posted at least 30 minutes before the  displaying of flag D on the day it will take effect, except that any change to the schedule of  races will be posted no later than 30 minutes after the end of the protest time limit on the  day before it will take effect. Oral changes may be given on water as per RRS 90.2(C)

4.1 Signals made ashore will be displayed on the official flagstaff at the marina.

4.2 When flag “AP” is displayed ashore, 1 minute” is replaced with not less than 90 minutes in  the race signal AP.

4.3 [DP][NP] Flag D with one sound means: “The warning signal will not be made before the  scheduled time or less than 90 minutes after flag D is displayed, whichever is later. Boats  shall not leave the harbour until this signal is made.”

5.1 The schedule of activities will be as follows:

5.2 **One representative per boat is allowed.

5.3 There are 12 races scheduled for the regatta

The Class Flag will be white flag with the SB20 Class insignia.

Attachment A shows the location of the racing areas.

8.1 The diagrams in Attachment B show the courses, the order in which marks are to be  passed, and the side on which each mark is to be left.

8.2 If only one mark is present at the leeward gate, it shall be rounded to port.

8.3 No later than the warning signal, the Race Committee signal vessel will display the  approximate compass bearing of the first leg.

9.1 Mark 1 will be an inflatable yellow truncated conical buoy.

9.2 Mark 1a will be an inflatable yellow cylindrical buoy.

9.6 The finishing marks will be a Race Committee vessel and a blue oval buoy.

10.1 To alert boats that a race or sequence of races will begin soon, the orange starting line flag  will be displayed with one sound at least five (5) minutes before a warning signal is made.

10.2 The starting line will be between a staff displaying an orange flag on the Race Committee  vessel at the starboard end and the course side of the port-end starting buoy or a committee boat

10.3 A boat that does not start within 4 minutes after her starting signal will be scored Did Not  Start without a hearing. This changes RRS A4 and A5.

11 CHANGE OF THE NEXT LEG OF THE COURSE

11.1 To change the next leg of the course, the Race Committee will lay a new mark (or change  the gate or finishing line) and remove the original mark as soon as practicable. When in a  subsequent change a new mark is replaced, it will be replaced by an original mark. In a  change of course Mark 1a will not be deployed.

11.2 The position of any mark(s) may be adjusted by up to plus or minus 10 degrees relative to  previous location and up to approximately 200 metres to windward or leeward without  signalling Flag C, a direction signal, a length signal or a sound signal. This changes RRS 33.

12.1 The finishing line will be between a staff displaying a blue flag on the Race Committee  vessel and the course side of the nearby finishing buoy.

12.2 [DP] When boats are finishing, boats who have finished shall avoid the finishing area, keeping well clear of all boats racing, and shall not interfere with a boat that has not  finished.

The penalty for breaking a rule of Part 2 will be a One-Turn penalty. This changes RRS 44.1.

14.1 Race time limit - The time limit for boats to sail the course and finish is 90 minutes.

14.3 Boats failing to finish within 20 minutes after the first boat sails the course and finishes will  be scored Did Not Finish without a hearing. This changes RRS 35, A4 and A5.

15 PROTESTS AND REQUESTS FOR REDRESS

15.2 Protest forms are available from the Race Office. Protests and requests for redress or  reopening shall be delivered there within the appropriate time limit. Contact mobile phone  numbers shall be included on the protest form.

15.3 The protest time limit is 90 minutes after the last boat has finished the last race of the day  or the Race Committee signals no more racing today, whichever is later.

15.4 Notices will be posted no later than 30 minutes after the protest time limit to inform competitors of hearings in which they are parties or named as witnesses. Hearings will be  held in the Jury room – 13 Degrees at Latitude Bistro.

15.5 Notices of protests by the Race Committee, Technical Committee or Protest Committee will  be posted to inform boats under RRS 61.1(b).

15.6 On the last scheduled day of racing a request for redress based on a Protest Committee decision shall be delivered no later than 30 minutes after the decision was posted. This  changes RRS 62.2.

15.7 Decision of the protest committee will be final as provided in RRS 70.5

16.1 A minimum of 4 races are required to constitute the SB20 Asian Grand Slam & Asia Pacific  Championship.

16.2 When fewer than 6 races have been completed, a boat’s series score will be the total of her  race scores.

16.3 When at least 6 but less than 10 races have been completed, a boat’s series score will be  the total of her race scores excluding her worst score.

16.4 When 10 or more races have been completed, a boat’s series score will be the total of her  race scores excluding her 2 worst score.

17.1 A boat that has retired from a race shall notify the Race Committee vessel as soon as  possible by hail or by radio transmission.

18 [SP] REPLACEMENT OF CREW OR EQUIPMENT

18.1 Substitution of competitors will not be allowed unless authorised by the Race Committee.  Requests for substitution shall be made in writing to the race control at the first reasonable opportunity.

18.2 Substitution of damaged or lost equipment will not be allowed unless authorised by the  Race Committee. Requests for substitution shall be made in writing to the race control at  the first reasonable opportunity.

18.3 Substitution of competitors, repairs or replacements to equipment, may be made on the  water before or between races provided that the Race Committee afloat is notified, and  approval granted by the committee before the next race. After the end of the day’s racing,  the substitution is still subject to the approval of the Race Committee given retrospectively.

18.4 Failure to comply with SI18, the boat will be scored additional 2 points for all the applicable races to her finishing position.

The Race Committee may broadcast information available to all competitors by radio on  VHF Channel 76, including starting and safety information.

Boats shall not put trash in the water. Trash may be placed aboard support and Race  Committee vessels.

Boats shall be kept in their assigned places in the marina.

Boats shall not be hauled out during the regatta except with and according to the terms of  prior written permission of the Organising Authority.

Underwater breathing apparatus and plastic pools or their equivalent shall not be used  around boats between the preparatory signal of the first race and the end of the regatta.

Competitors participate in the regatta entirely at their own risk, see RRS 4, Decision to  Race. The Organising Authority will not accept any liability for material damage or personal  injury or death sustained in conjunction with or prior to, during, or after the regatta.

Each participating boat shall be insured with valid third-party liability insurance with  sufficient minimum cover.

ATTACHMENT B – THE COURSES